June 11, 2013
With the school year wrapping up, some reflection is expected.   Tonight's discussion was about teachers.  Despite my son's unique educational needs, he's been very fortunate to have excellent teachers so far.  We know that is not always the case, and were discussing how lucky he has been.  His educational course has not been what we initially wanted, but it has allowed him to have access to phenomenal teachers in two different schools that have been the best fit for him.

I was educated in the Catholic Schools of the Albany Diocese.  I don't know if it is still the case, but when I was in elementary school, the catholic schools got a lot of new teachers.  This can be good, but for me it was very bad.  While my son has had the most wonderful teacher this year (we love you Mrs. Hippchen!), I had a horrible third grade teacher.  It should not come as a shock to anyone who knows me, but I was pretty caught up in grades.  In the third grade, your grades were given as descriptive categories (Excellent, Good, Average, Poor and Fail).  All year long, I got 'Average' grades, especially in spelling.  I had never had something in the middle category before.  I was a very good student.  My older brother made sure to point out that 'Average' was essentially a 'C' grade.  I was devastated.  My mother was enraged.  She met with the teacher over and over.  She met with the principal.  What was the big fuss?  I never got below a 95% (but mostly got over 100% with bonuses) on my spelling.  Yet that teacher graded me as 'Average.'  When my mother questioned her on it, her reply was, "Well, that's average for her."  It made me doubt myself.  I felt sick to my stomach all the time.  I hated school.  Looking back on that year, I still get a pit in my stomach.  I can only be thankful that Jake's third grade experience was as positive as mine was negative.

I also think to my math teacher that I was oh so fortunate enough to have for 6th, 7th and 8th grade.  She didn't like me.  It was pretty obvious.  I was probably somewhat pretty obnoxious to have as a student.  I'm pretty sure I was a Tracy Flick kind of student who thought they knew it all.  Math was not my favorite subject, and I often rushed to get through it, making careless mistakes.  However, I can, with distinct clarity, remember the day that she told me that I was horrible at math, and that I would never amount to anything.

She said this in front of the whole class. 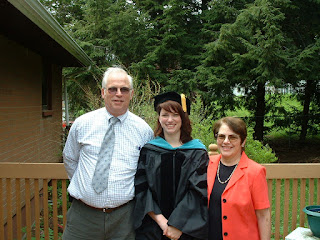 For a few years, it broke me.  Afterall, she was my math teacher for 3 years.  I got into high school and had some really great math teachers.  Mr. Corbeil restored my faith in myself.  Sr. Kennan (RIP) never took 'no' for an answer.  My senior year, I took two honors math classes, one the prerequisite for the other, and managed to get straight A's.

But along the way, I also had some really great teachers.  Miss Norton, Mrs. Morrissey, Sr. Mary Catherine, Sr. Frances Celine, Miss Hoagland, just to name a few.  I was also lucky enough to have parents who valued education, and who did not let the negative words of a poor teacher impact the rest of my life.  In those same moments listed above, I think of them with gratitude.

So to all the teachers out there who are fried, and just need the year to end, don't break your students.  Help make them.  And to the teachers who spend every day trying to make their students, thank you.