June 20, 2013
When I came up with the idea to write a novel, I had a thought in my head.  The "what if this happened ..." type thing (that exact idea would be a spoiler, so I don't want to go into too much detail).  Then I needed characters and settings.  I decided to go with the advice of "write what you know" so the character of Maggie is very loosely based on me.  The setting of Boston is from my own experience there.  Trying to figure out how Maggie lived and moved about the city, I pictured back to my own college days spent in Allston-Brighton and Boston.

One of the things that most helped me go back to that time was listening to music.  As luck would have it, I had just gotten an ipod for my birthday and I had uploaded from my collection of CDs from the mid to late 1990s.  I belonged to BMG music club (for those of you who don't remember this, it was a club where you got 13 CDs for $0.01, and then had to buy or return CDs every month), so I had quite a few.  I then hit the itunes store and downloaded a lot of the songs from college, some of which I only possessed on cassette tape.  Holy crap, I feel old.  At the same time, a new local radio station that only played music from the 1990s launched around here, and in between Christmas and the Superbowl, it played music without DJ's and virtually commercial-free.  Between my ipod and 105.7 FM, there was a lot of 90s music that helped me set the scenes for the book.

If I had to come up with a soundtrack or playlist for Good Intentions, based upon my frame of mind, the scene, and specific songs referenced, here is what it would look like.  Hope you take a listen, and think of these songs as you read.  Enjoy!


2.   Dancin' In the Light by Entrain
(This is a horrible audio, but for some reasons, the other, better ones would not upload.  Check out Entrain.  Can U Get It? was my favorite CD during all of college and I used to go see Entrain live all the   time)


9.   Crash Into Me by Dave Matthews Band


13. Tracks of My Tears by Smokey Robinson

Hope you enjoy the somewhat eclectic music selection that motivates and moves Maggie Miller.  If you haven't read the book yet, keep these songs in mind while reading.

Good Intentions is available on Nook, Kindle and Kobo.  It will be out in print hopefully in the next two weeks! 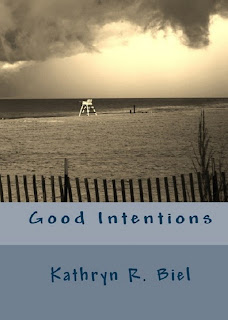