May 08, 2013
Last Wednesday, and again this Wednesday, I was inspired.  Today, I vowed to write about it.  However, something else came up that I wanted to share.  I will write about inspiration, but perhaps later.

The story started almost exactly a year ago.  Ok, the prologue started last April, when our family cat, Harper, died.  I reassured the kids that we would get kittens.  Harper, while she loved us, did not tolerate other animals.  This time around, I wanted to get a pair of cats so they could keep each other company, and tolerate other animals better.

When the right time came, we went to a nearby horse farm.  There are always lots of cats around there (we buy hay there), so we figured there were kittens.  And there were.  Sophia said immediately and unreservedly that she wanted a yellow cat.  Jake wanted a gray cat.  Low and behold, the litter of four kittens consisted of three grays and one yellow.  Two weeks later, we went to pick up our new family members.  The owner remembered that we wanted the yellow, and brought him out first.  One of the gray kittens had disappeared. There were two gray cats left.  One was really skittish and hid, so we got the less skittish kitten (say that ten times fast). 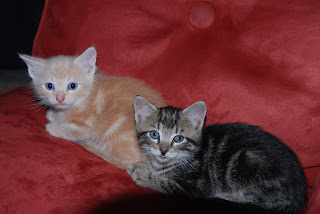 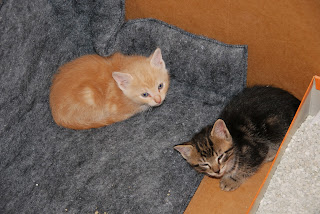 The first day or two, the kittens were scared of us.  Finally, we just held them and petted them until they relaxed and trusted us.  We named them Butch and Sundance.  Very quickly they became part of our family.  Friends and family came out of the woodwork to visit.  Within a few days, the kittens had ventured upstairs (just in time to tuck the kids in).  There was little sleep and lots of scratches.  But we loved it.  Sophia invited friend after friend over to see "the boys."  Sophia, while happy with her yellow cat, was disappointed that the gender of both cats was male.  She felt that this somehow lessened them, because they were not girls.  I'm not even touching that one.  She was heard, making apologies to a playmate, "I don't want to upset you, but the kittens are both boys." 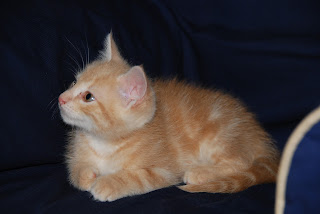 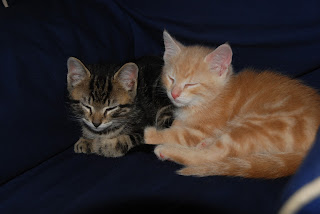 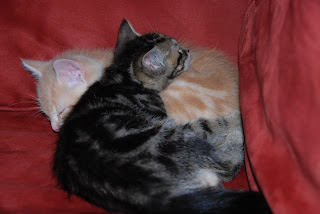 Needless to say, the boys dominated our lives.  They were always together.  We joked that we should have named them "Smoke" and "Fire," because where there's smoke, there's fire.  The kittens' markings are also virtually identical.  They often sit in the same posture, or curled up on each other.

The cats love the kids.  For a while, Butch ("Jake's cat"), would sit outside his door, and promptly at 7 am would meow for Jake to get up.  Now, Sundance meows for Sophia to get up.   Except, he wakes with the sun, so it is more like 5 am.  Sundance, who is "Sophia's cat," also has an obsession with Sophia's hair doo-dads, and often lifts up the lid on her jewelry box to steal them.  Sundance follows Sophia around, no matter how much she manhandles him.  Butch engages in lengthy, reciprocal conversations with us.  He also feels that if we pick him up, it must mean that we want him to climb up on our shoulder and perch like a parrott.  He's not the sharpest tool in the toolbox.  Butch likes to sleep with me, right next to my shoulder so it is impossible for me to roll over.
The cats, like most house cats, dream of the big world outside.  I know, in their little feline souls, they are all fierce, and could bag those pesky squirrels, no problem.  Every so often, I think about letting them out, especially when the squirrels are doing their damndest to chew through our composter.

Our cats' birthday/anniversary is this Sunday,  I was trying to think of how we would celebrate that milestone.  I cannot believe that a year has gone by, but on the other hand, I cannot imagine our life without the boys.  Today, Butch went missing.  I realized this morning that I had not seen him.  The kids and I searched, and called for him, but nothing.  My first thought was that he had gotten into the garage last night, as I left the door open while making several trips out to my car.  The garage was the first place I looked.  No response.  No response anywhere.  Butch is such a vocal cat, that we figured he was either dead or had gotten outside.  I was lax about the sliding glass door while grilling last night, so it could have happened.  No one remembered exactly when they had seen Butch last.  Pat came home at lunch and walked around the neighborhood, calling for Butch.  After work today, I called Animal Control and the vet's office.  I drove to the animal shelter and another vet clinic.  I went over to the neighbors' and showed pictures.  I was trying not to despair.  Butch likes to climb (up our wooden newel posts, up our table legs, up our cabinets, up our backs, so I was hoping that natural instincts would kick in and make up for some of the brains that he appears to lack, and keep him safe in the big bad world.

Now, I know, it's just a cat.  But he is like our family, and I was very scared that he was dead, either in the basement or outside.  I did not know how Sundance was going to live without his brother.  He spent all day walking around, meowing for him.  I was trying to hold back my tears.  I could not believe that four days short of his birthday, he was gone.  Suddenly, Sophia reported that she heard Butch meowing.  We listened, and sure enough, we heard him too!  The dumbshit was in the garage the whole time!  I opened the door, and he came flying in, very skittish.  I yelled at him, "Where have you been?!?"

Pat and I were incredulous.  We both had looked in the garage for him, and called for him out there.  Sundance, while relieved, was a little pissed at Butch for deserting him.  The kids were just happy to have him back.  Cat birthday celebration back on, the Biels are once again complete.