Now, I firmly believe that parents should parent, and not worry about being their kid's friends.  That being said, there is part of me that wants my kids to think I'm super-cool.  And that it would be even more super-cool if they thought that while I was being a kick-ass parent to-boot.

As you may be aware, Jurassic Park has been re-released in 3-D for the 20th anniversary.  [Pause here to lament that I first read the book when I was 16, and wrote a term paper on it in Junior English, and that was 20 years ago! Holy cow, how did that happen?!?] Jake, being a typical nine year-old boy, told me he wanted to go see it.  He claims to have seen parts of it on tv, and that he wasn't at all scared by it.  So, me, the super-cool wannabe, plans this whole day.  I take Jake to drum lessons, and plan for the movie afterwards.  I have Pat running diversion with Sophia so she won't realize that we went to the movies, because I KNOW the movie is too scary for her. 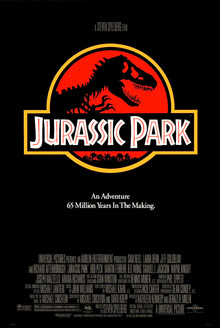 Minutes before getting to the theater, I get a hold of my best friend.  Since I'm driving, I put her on speaker.  I tell her that Jake and I are going to see Jurassic Park.  She kind of has a mini-stroke and relates (on speaker phone, mind you) about how people on the radio were saying how scary and gruesome it is in 3D.  Now, I've read the book.  I've seen the movie.  I went through a phase where I worshiped all things Crighton (until Congo came out, from which I will never recover).  Jake's seen parts of the movie.  How bad can the 3D make it?  I reassure her, and Jake, that it will be totally fine, since there is no way a person can ever really get eaten by a dinosaur (as opposed to a shark, which can really happen and is therefore infinitely more scary).

Um, yeah.  It wasn't the 3D.  It was the T-Rex roaring at full volume, with the awesome, state-of-the-art audio systems that were not around 20 years ago.  It was my son, curled up into a ball, covering his ears.  Of course, the T-Rex dropping the goat leg on the roof of the Explorer didn't help.  Neither did the guy getting eaten while he was on the toilet.

Now, I tried to do some damage control.  I told Jake, while holding him tightly, who was going to get killed and who was not.  Sometimes, he does better if he knows that a character will survive.  Before the raptors got loose, he asked to leave.  We did (even though I was enjoying the movie tremendously, and didn't really notice a difference with the 3D effects, frankly).

Jake has been unusually quiet.  He asked to go to Barnes and Noble, but couldn't find anything that interested him.  He said he had a headache.  We got some FroYo, and talked about the movie.  Mostly, we talked about the outdated computer systems and how computers used to be.  He did not seem to want to talk about dinosaurs at all.

I'm pretty sure I scarred him for life.  This is what I get for trying to be the cool mom who ignores the rating guides (as well as the people calling in on the radio).  I hope he doesn't have nightmares.