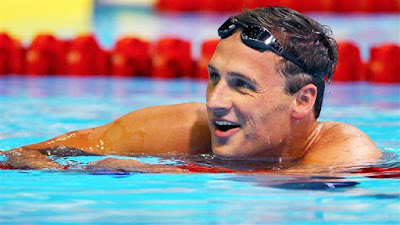 I was even sort of excited when I found out he was going to have his own reality show, What Would Ryan Lochte Do? I never ended up watching the shows because it became apparent in some of Ryan's post-Olympic interviews that while he certainly is pretty, perhaps his personality and brain power is not at the same caliber as his swimming.

I'm not sure how much of it is an act, but he appears rather dim. I don't think it's an act.

I wondered in this Olympics how much media attention he would get, seeing as how it is pretty clear that he's not the best character story. He doesn't interview well, and some of his waters tend to be on the shallow side. It didn't stop me from rooting for him, even with the hair debacle. 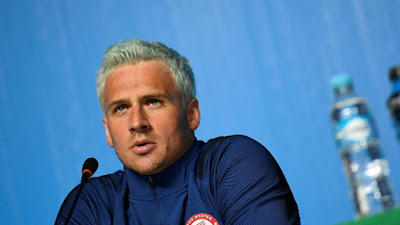 Again, it sort of shows the caliber of intellect. He's spent his whole life in the pool and didn't realize that chlorine would change the bleach color...

And then there's that night. The story of the robbery, being held at gun point. The "over exaggerated details." The drunken shenanigans.


And I got mad. Now before you go thinking that I'm blinded by the pretty smile (and the much better hair), think about these things.

In summary, Ryan Lochte is not bright. He did a stupid thing (for which he has apologized). However, he and his teammates were actually robbed at gunpoint, and Jimmy Feigan was extorted, and we all seem to be okay with it. Oh, and Matt Lauer is a bully.

Let's look into the shady corruption of the security guards and Brazilian government, and let Ryan Lochte go away for a while. I think that might be best for all of us.