December 11, 2013
From the time I was a little girl, I heard the stories about princesses. While I liked them, I didn't buy into them a whole lot. Somehow, they all seemed too good to be true. But nonetheless, I was fascinated by the fancy dresses, and wanted nothing more than to attend that fancy ball. Somehow, that fancy ball never really came along, and I realized that life doesn't happen the way it does in the stories. Now that I'm (sort of) grown up, I can tell my daughter will all certainty that these princess tales are a load of hooey.

Here's how I know.

This past weekend, the hubs and I got all gussied up and went to a formal event. And there was sure-as-heck no Fairy Godmother bippidi-boppidi-booing in and making me look my best. Oh, no. There was work that went into it. Lots of work.

The dress was easy. After combing e-bay, my friend and I went to a local consignment shop. This shop gets dresses from a bridal shop, so there are a lot of new dresses that were floor models. They carry a lot by one of my favorite designers. I found one (ok, two) that I liked and got it (them). One fit a little better than the other, so rather than have to worry about dropping a few pounds around Thanksgiving, I went with the more comfortable one. It needed to be shortened, and I was even able to do it myself. It involved taking the dress apart, which was a bit nerve wracking, as it is a designer dress. I have to say, I felt pretty proud that I was able to do that kind of sewing work.

But that is where the similarities to Cinderella end. While I was getting my hair done, I decided on a D-I-Y facial a few days before. I did what all the women I know do--I consulted Pinterest. That was my first mistake. I read the blogs about how to do the facial, a pore cleansing one. People talked about the smell, so I was prepared for it. I was not prepared for the absolute pain and agony as I removed the mask. It was supposed to be pore cleansing, but I believed it ripped out all of the fine hair off my face. Also, because I'm entering a more "mature" phase of life, the skin on my face is not as tight as it used to be. As I tried to peel off the mask, my skin was going with it. Tears formed in my eyes, and I was worried that I would not be able to continue, and that I would be forced to live out my days with half of my face frozen in milk and gelatin.

Then, there is the getting the hair done, the make-up process, the pedicure. Okay, that stuff is pretty enjoyable. I've gotten pretty good at false eyelashes. There was a minor moment when I grabbed the nail glue instead of the eyelash glue. (At least they would not have fallen off. EVER.) I caught myself and let out a big sigh of relief.

Then there are the nails. My job, plus my awful habit of nail biting, leads me to have to use false nails. There are ones that go on very quickly (like, in 5 minutes or less). Doing the first hand was fine. But I am not used to having long nails, so I had a lot more trouble putting the nails on the second hand. Which led me to, at one point, use my mouth to reposition the nail that I had just tried to glue on. Which led to getting nail glue on my lips. Luckily, I did not glue my lips together, but it was mighty close. How would you explain that one?

So the nails lead me to another issue that I bet Cinderella never had to deal with. Do you know how hard it is to pull up Spanx with fake nails on? On a good day, you can get a decent cardio work out just trying to get into Spanx. Pulling them up with nails on, damn near impossible.

Of course, it snowed the night of our event. It was sleeting as we got there, and downright snowing by the time we left. I was happy to have open-toed shoes and bare arms. My husband just looked at me shivering and said, "Well, you're the one who didn't wear a coat." He didn't get that my fur wrap looked so much better. Never mind its complete and utter uselessness in the elements. 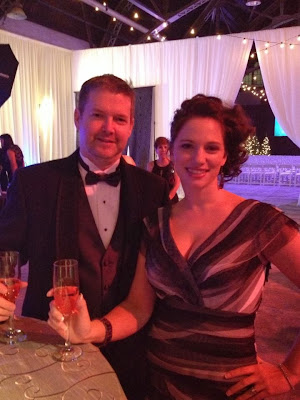 I'd like to think all the efforts and near disasters were worth it. We had a lot of fun, so I guess that is what counts (as well as the fact that we were supporting a very worthy cause).

Next year, I just want to be able to say, "Bippidi-Boppidi-Boo!"