Everything old is new again

March 03, 2013
My grandmother, Mimere, was the quintessential LOL...little old lady.  By the end of her life, she topped off at about 4'6" tall, complete with white hair that she got "done" weekly.  Even when I was a child, I never remember her washing her hair, but that she went weekly to the beautician.  As such, to protect her carefully curled, teased and sprayed helmet of hair, she implemented a number of accouterments to help her hair last the week.  The first was the chiffon scarf, worn ala Jackie O.  However, Mimere (God rest her soul) somehow lacked the, um, fashionista qualities that Jackie possessed.
This scarf was used to ward off wind, as in the picture above from a senior's trip.  Her second hair-protection tool was the sleeping cap.  I remember her using this when I was a child, having sleep overs at her house.  Since I had used something similar as a child, it was not a foreign concept.  It is, as the name implies, a cap (like a fabric shower cap), used to protect curls at night.  I don't know that she used this throughout her life, but I seem to remember seeing one under her pillow case on those occasions when I would help her make her bed.

The third, and most important tool in her hair protection arsenal was the plastic rain bonnet.  This was to protect her coif from its arch-nemesis, moisture.  She kept one (at least that's what I thought, until we found her secret cache) in her purse.  At the slightest drop of H20 in the air, she would whip that sucker out and cover, faster than I had ever seen her move previously.  Even if precipitation was even forecast-ed, she would don her rain bonnet, just to be safe and protected.

Now, being the disrespectful person that I am, I used to (ok, and still do) mock the rain bonnet.  I have told my friends that I never want to get to that stage in life.  However, the rain bonnet, and all the hair coverings, were such a part of Mimere, that I could not bear to let some of them go when we were cleaning out her stuff.  I may have previously mentioned here, that my grandmother was a closet hoarder.  When cleaning out her dresser (and closet, and clothes press), we found hair scarves and rain bonnets stashed.  I'm pretty sure the rain bonnet market collapsed after her death, as its largest supporter was gone.  But I had to save one scarf and one rain bonnet.  Just because they so reminded me of her.

Sophia inherited Mimere's dresser.  About a year after moving the dresser in, I noticed that one of the drawers was not closing properly.  When I removed the drawer, instead of finding a sweatshirt or pants of Sophia's, like I expected, I found a plastic bag, full of scarves and bonnets.  It brought a tear to my eye, and I just put it aside in Sophia's room.  Even though I had saved my token bonnet, I could not bear to part with this bag (but seriously, how many did she have?!?).

Fast forward to today.  Sophia ended up showering before dinner, and, since I had the time, I set her hair in rollers.  I used to get my hair curled on Sunday nights when I was growing up, and it made me feel nostalgic. As bedtime loomed, Sophia started to get nervous that the curlers would fall out while she slept.  I, myself, used to wear a sleeping cap to hold the curlers in.  And then it hit me...the bag from Mimere!  I looked through it and, sure enough, there was an unopened sleeping cap. 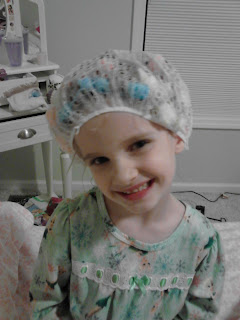 Somehow, Mimere was watching out for us.  Not necessarily a fashion plate, but she makes it work.  And everything old is new again.

Although, I will have to put my foot down if she wants to wear a rain bonnet.