March 13, 2013
I had suspicions early on that Jake's development was not normal.  Sure, he was healthy (which, working with disabled kids, I did not take for granted), but I felt from about the time he was a year old that something was amiss.  He would not perform on demand.  For example, he could wave 'bye,' but not on command.  When playing pat-a-cake, after I moved Jake's hands, he would then move mine, imitating what I had done, but not internalizing the movement to himself.  Although he could isolate a finger, he did not point at objects.  But he had a tremendous understanding of what was being said to him.  When he was about 11 months old, he was sitting and playing with his foot.  My dad said to him, from across the room, "Left foot, left foot. Right foot, right.  Feet in the day, feet in the night."  Jake took off like a shot, crawling down the hall to his room.  He returned moments later with "The Foot Book" by Dr. Seuss, which that line was from.  He spoke his first word ("Hi!") in a very appropriate way to a little girl at the Stride Right store at the age of 13 months, and then didn't speak again until about 17 months.

From this point on, Jake's development was atypical.  In hindsight, he stopped making good eye contact, but I didn't recognize that at the time.  And when he did start speaking, if it was more that a one word utterance, it was scripted.  Meaning, he had heard that phrase before (from us, a book or usually, a TV program).  For example, if Jake wanted milk, he would say, "Do you want milk?" because that is what we always said to him.  When Jake started rote counting, sometime around 20 months, (and even one to one correspondence counting), he would not start at one.  I would count (usually bites of food or stacking cups), and Jake would follow, and be silent until I got to seven.  Then he would take over, saying "8, 9, 10."

At the age of 2, while driving around with his grandfather, when they approached a turn that could take them to a playground, Jake asked, "Wanna go to the P-R-K?"  (My dad would spell out park to me when discussing it).  So he skipped the vowel, but still pretty good.  But Jake, who showed us from an early age how with-it he was, would adapt these scripted phrases.  He could recite 23 minute TV programs verbatim, but would change the characters or the setting to fit into his play and his needs.  He didn't use imaginative play--it was all from TV shows.

Even though I knew his play was not typical, I thought it was special.  It showed that my kid was smart enough to figure out a way to use what he had in a functional manner.  It was a little consolation during a difficult time when the books on typical child development were of no use because, as we like to say, "Jake never read that book so he never followed what it said."  It was a glib answer to gloss over a difficult time in which I desperately needed a book to turn to give me guidance and answers.

So fast forward to now.  Jake is 9.  He still (sort-of) fits with the Autism Spectrum thing, but is doing really really well.  He's come a long way and is a happy, generally well-adjusted child.  We are very open with him about how he is in someways different from other kids.  That some things (like his memory and knowledge) are very easy for him but other things (like speaking in a way that kids understand) is more difficult.  We stress that every one has things that they are good at and things that are more difficult, and that different is neither good nor bad, just different.  I don't even think he thinks about it that much and is just happy being himself.

I credit lots of intervention for Jake's success.  Also, Jake is very bright, which is the biggest prognosticator for success in people with Austism Spectrum Disorder.  He is not cured.  He did not grow out of Autism.  But he is engaged, compassionate and functional, which is good enough.  Also, it can be said that he is happy, loving, funny, good-natured, well-behaved (generally), and an all-around great kid.

So, all this background leads us to today.  Or yesterday, to be exact.  Jake still has special interests, like most people with Autism (especially Asperger's Syndrome).  Currently, one of his special interests is Star Wars, which makes him actually like most other 3rd grade boys.  Due to the weather, they had indoor recess.  Jake brought home this: 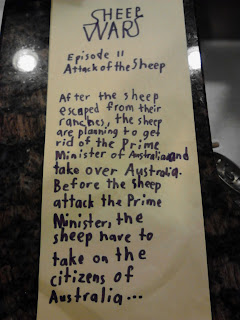 So, this is why I think his scripted play is brilliant and functional.  Did I mention that they are studying Australia in school?

And, here is what makes this ten times more awesome that it already is...this is a group effort.  One classmate came up with the idea of Sheep Wars.  Jake calls him the inventor.  Jake is apparently the writer.  There are three other boys involved in creating this alternate story (apparently, penguins will play the role of the Jedi's).  Two of the boys in the group he refers to often as his "friends."  I know one of the boys (whose mom is also awesome and a resident of Kate-ville), knows Jake is a little different, and has even witnessed one of Jake's meltdowns.  And he still is Jake's friend.  So, here is Jake, using the skills that he has, never having read the book on being typical, having a grand-old-time creating something totally awesome, as part of a group of FIVE KIDS.

This is all we've ever hoped for for him.  To belong and to be accepted.  To have friends.  My heart is full.  This moment of triumph may be soon replaced by the turbulence and turmoil that is part of growing up.  But I'm so glad that Jake never read that book, because I'm so happy with who he is.