April 17, 2019
'Twas the night before pub and all through the place,
I know I should be writing instead of staring into space.

There's reviews to seek and ads to make,
Yet all I can do is eat another piece of cake.

It's true--I want all the cake. Oh, and it is indeed the night before release for my thirteenth book, Ready for Whatever (The UnBRCAble Women Series, #1). I'm in love with this book on so many levels, but let's start with the most basic. Would you look at this incredible cover?

But more important is the story behind the conception of this book. Rewind to last July. On Sunday, I finished going over the first draft of Paradise by the Dashboard Light and submitted it to my editor. Monday, July 8, left me without a current work in progress (WIP). In my head, I was going to write the women's fiction/family drama that I'd been taking notes for. However, my title for that book began with S. I needed an R title.

(Yes, I title my books in alphabetical order. It's a long story. Also, Q and P were reversed in release order due to issues beyond my control, but I didn't want to let that happen again. I've got some compulsion issues.)


Monday, July 8, 2018, I literally spent 2 hours searching for those files on my computer. When I finally found them and tried to write, it was like trying to get milk from a stone. I spent the day, even at the pool with my kids, feeling tremendous pressure to write but not being able to. I was also battling tremendous feelings of anxiety. My friend, Erin Huss, was three-thousand miles away, undergoing a prophylactic bilateral mastectomy and reconstruction due to a predisposition to breast cancer.

I hadn't wanted to tell her this, but I'd talked to a few women who'd had disastrous prophylactic mastectomy experiences. I was nervous for her. All day I stalked not only hers but her husband's social media, looking for an update. I messaged mutual friends to see if they'd heard anything. Around 9:30 pm, I dozed off (what can I say, I like to go to bed early).

As my anxiety ratcheted up (why does sleep seem to do that?), my mind raced, set to the soundtrack of Mama Mia!, which I'd seen that weekend. If you want to feel stress, play Super Troopers on a loop in your brain and see how relaxed you feel.

I woke up in the middle of the night to find this message from Erin:
💪💪👍

I relaxed some, and sent the message that I was glad to hear from her and to say yes to all the drugs. A few hours later (damn Abba), I awoke to find this message:

Lol. I so don’t remember sending the above emoji

I do remember thinking that I needed to let my book girls know I was alive and well, though! Ha. I’ve been saying yes to ALL the drugs. As I lay here at 1:30 AM, not tired (slept all day) I’ve been running. You know what would be a sweet premise for a contemporary rom? A young woman who loses her mom to BC, finds out she’s BRCA 2 and undergoes the mastectomy and all the recon surgeries. She also has a full hysterectomy (as with most BRCA). In the meantime she meets a single dad, he could probably have a wacky ex-wife, and they fall in love. But she holds back because she one) can’t have kids and he’s expressed wanting more. Two) no man has seen her reconstructed breasts (boxy boobs with no nipples can be jarring). Plus she has zero feeling in them. She’s struggling to feel like a woman. Could be the drugs. Or could be a brilliant idea. Either way, you could write beautifully. Call it previvor.

Yes my friends, that is how Ready for Whatever came to be. Before 6 am, I had the first chapter (now actually the second chapter) written, starting with the line,

"Look on the bright side, Millie. At least you don't have cancer."


By midmorning, I'd also worked on a cover concept. Here was my initial thought: 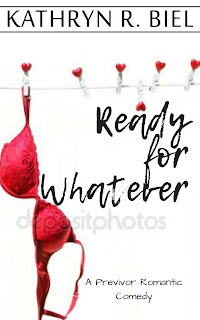 FYI, there's a reason why I hire a cover designer.

So, all these months later, this project is finally ready for the world to see. No matter how many books I release, there's always that moment of feeling that I'm standing in front of the world, naked. I can't imagine ever getting over that sensation.

Cancer touches us all. But many of the issues in this book are not exclusive to cancer. While this is a book about loss, it's also a story of found. And all women need that message of finding, even in the face of loss. Plus, believe it or not, this is a funny book. If you don't believe me, will you trust a review?


"I love chick lit, but this book transcends the genre."
-Readers' Favorite

Otherwise, please just have a piece of cake for me. :-)