So, it's December again.  Which means one thing...MY BIRTHDAY!!!

No, seriously, it's that busy Christmas season where the words 'chaotic' and 'cacophony' can be used almost daily.  The moms I know are running around, even more frenzied and harried than usual.  The dads must still believe in Santa, because suddenly, Christmas has been delivered to their house.  Even though Thanksgiving was early this year, there never seems to be enough time (ie, weekends) leading up to the big day.

I gotta admit...I love the lights.  I love the way my house looks all decorated.  I hate taking the stuff down, not just because it's a lot of work, but because my perfectly respectable house looks dull and blah afterwards.  I love that the kids plug the tree and indoor lights is every night.  There is just something indescribably peaceful about sitting in a room lit only from the soft glow of the golden Christmas tree lights.

Singing Christmas songs really does lighten one's mood, I find.  I just wish they wouldn't convert the radio stations over to all Christmas until after Thanksgiving.  And I wish many of the stations would vary their selection.  There are so many cool versions of songs out there.  My favorite Christmas song has historically been Christmas Wrapping by The Waitresses.  I don't hear it that much anymore.  I have, on many occasions, sat in my car, just to listen.

A leftover remnant of my childhood piano lessons is a book of Christmas carols.  I remember a lot of them without the music, so Christmas time is the one time of the year that I really sit down and play the piano.  My kids are fascinated by it.  Makes me wish I had kept with it, but I like at least being able to play some favorites.  Sometimes I feel like Janie in "It's a Wonderful Life" practicing 'Hark! The Harold Angels Sing' over and over.

Speaking of "It's a Wonderful Life,"  I love all the Christmas specials.  Sophia listens to the "A Charlie Brown Christmas" soundtrack year round, every night to fall asleep (long story--neighbors were being loud one night, and it was the only instrumental CD I could put my hands on in the dark at 10 pm).  It's a little odd to be listening to 'O Tannenbaum' in July, but it seems to fit now.  All of us, even Pat, can watch "A Charlie Brown Christmas" over and over.  I mean, the dancing kids are just the best. 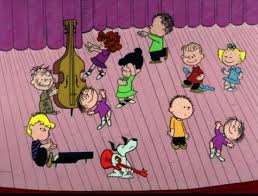 And "How the Grinch Stole Christmas" (the cartoon, not the movie) is one that I cannot miss.  Imagine my delight when Jake started doing his best "You're a Mean One, Mr. Grinch" at breakfast yesterday morning.

My Christmas show this year is 'Elf: The Musical.'  It's extra special this year because Sophia is in it with me.  Her very first one!  We all love the music and have been singing it non-stop for weeks.  I find myself waking up at all hours of the night with the songs running through my head.  I still have to sew trim onto five more ballet costumes before Sunday's performance, yet here I sit writing instead of sewing.  I'm pretty sure I'm going to make a gigantic ass out of myself, but it can't be any worse than the year I was Fiona in "Shrek the Halls."  I was GREEN for pete's sake!
Last year, when we did "The Nutcracker, All Jazz'd Up,"  I was a little more respectable as the Sugar Plum Fairy.

So, we have that for the next two weekends.  Good thing the house is all decorated.  Shopping is mostly done, but wrapping has not yet even been considered. Christmas cards are in process.  I cut back to 80 this year.  Snapfish only lets you order in bundles of 20, and for the past few years I've been sending out around 90.  Sorry to some that may have been cut.  Blame Snapfish (or blame yourself for NEVER sending a card back to us).  I really like getting the cards too.  Only two so far this year, but it's early yet.

So, in other words, I'm not sure how much I'll be able to blog over the next few weeks.  We have the Christmas show, birthday parties (not just for me), charity events, and getting though the next few weeks of school.

Here's another Christmas song to get you all in the spirit of things.  If this doesn't help, then you're just a big Scrooge.

Straight, No Chaser: The 12 Days of Christmas

Oh, and in case I forgot to mention, my birthday is coming up too!