November 28, 2012
My husband and I are getting a chance to relive the awesomeness that was our childhoods...Star Wars.

Now, I'm by no means a Star Wars geek, but I was born in the 1970's, so Star Wars was the iconic symbol of my youth.  I used to think that the 20th Century Fox theme was part of the Star Wars theme music, since watching the videos always started with that.  Insert geektoid fact here...the Star Wars trilogy is what saved 20th Century Fox from bankruptcy.  We had all three movies on VHS (illegally copied, of course).  I remember going to the theater to see Return of the Jedi in June 1983 for my oldest brother's 12th birthday party.  I only ever saw the other two at home on VHS (I was only 18 months old when Episode IV debuted).

I so wanted to be Princess Leia.

Now, Pat and I have spent a few nights this week watching parts of the three original movies with the kids (they've been on Spike), the four of us lined up on the couch all snuggled under the fuzzy blanket.  We point out to the kids where the digital remastering is.  Although the original effects leave a little to be desired by today's standards, for the time they were pretty awesome.  I remember watching a documentary about them once.  The light saber sound effect was caused by hollow tubes.  Pretty ingenious, no?

I think we're going to get the entire series and watch it with the kids, maybe over Christmas break.  It is so special to share this with the kids.  Sophia is asking hundreds of questions, but she's really interested, as is Jake.  Jake does not like The Empire Strikes Back, because he does not like when Han Solo gets frozen in carbonite.

Sophia insists that the bad guy is "Dark" Vader.  We do have to keep reminding her that the people in this are actors and this is not real.  She's afraid that the real people are dying.  We have to tell her that no people were harmed in the making of these movies.

Sharing this with the kids ties them to our history and our own youth.  We're looking forward to the next installment coming in 2015.

And I still want to be Princess Leia. 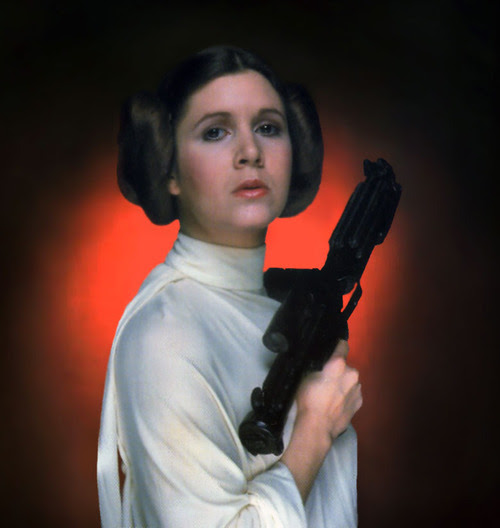